Benito Carbonella was born in Nuoro, Sardinia, but moved away at a very young age, first to Germany, then to Switzerland. He rose through the ranks of different hotels until reaching the post of Restaurant Manager. In 1973 he returned to Sardinia to take up a post of teacher in a Professional Training Center in Alghero. 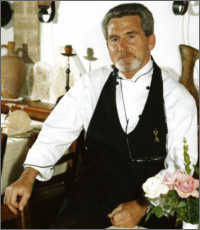 In the same year a building became available in the historic centre of Alghero and he converted it into the Al Tuguri restaurant, providing his interpretation of Mediterranean cuisine.
From this point on, in a soaring rise to stardom, his significant international influence on gastronomy and his regular appearances on television have not stopped. As an example of this he was invested as the Sardinian Catalans Ambassador of Cuisine, in 1994, and in the same year he was also awarded Maitre Of The Year.
Alongside his presence on visual media, newspapers, specialist magazines and lately Internet sites all pay homage with web pages, reviews, articles and interviews. Also, Al Tuguri is a regular for entertainment celebrities seeking the more reserved and exclusive eateries.